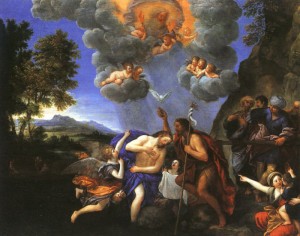 The biblical story of Jesus Christ and the mysterious John the Baptist has fascinated millions of people for nearly 2,000 years. The tale also has mystified scholars because of its supernatural and mystical peculiarities, including the motif of God the Father’s booming voice from heaven and a magical white dove descending upon the baptized Christ. Like Jesus and his immediate disciples, John the Baptist is missing from the contemporary historical record, and the evidence points to him as a mythical archetype, not a historical person. This “mythicist” view allows for the unraveling of the mysteries surrounding this strange figure and his relationship to Jesus as depicted in the New Testament and elsewhere.

John is called not only “Baptist” for his role in purifying Christ but also the “Forerunner,” as he preceded Jesus in time and importance, setting the stage for the coming messiah. In this role, it turns out, the Baptist/Purifier/Forerunner is not unique; nor is his use of water to impart righteousness and holiness.

Indeed, in the very region where the Baptist was said to thrive and where post-Christian sects revered him more than Jesus, east of the Jordan into Mesopotamia, there was worshipped for thousands of years a water god called by various names, including Ea, Adapa and Uanna. In fact, the Greek rendering of the aqueous Sumero-Babylonian god Uanna, Oannes (Ὡάννης), is essentially the same as Ioannes (Ἰωάννης) or “John” in the Greek of the New Testament. This ancient Babylonian deity had been discussed in some detail by the priest Berosus in the third century BCE, reflecting his continued importance to the people of what is now Iraq, as Oannes was said to have emerged from the Persian Gulf there many thousands of years ago to bring civilization.

Oannes’s role as water god is an indication also of his solar nature, as his emergence from the sea occurred at sunrise on a daily basis. This solar nature is important to keep in mind as we discuss the later aquatic figure of Ioannes/John the Baptist.

Mesopotamian peoples thus were fervent Oannes devotees for many centuries, into the common era, when their devotion was Christianized, and they became known as “Mandaean Christians,” from the Babylonian-Aramaic term mndaya, meaning “gnostic.” As the Catholic Encyclopedia says of the Mandaeans/Mandeans, also known as “Nasoraeans“:

Another name also found in their sacred books is that of Sabians (sbya) which means Baptists (sb‘ to baptize in Syriac and Aramaic)…. It is based on the prominence of frequentbaptism in their religious discipline and hence they are no doubt referred to by the Fathers as Hemerobaptists‘emerobaptístai i.e. practising daily baptism…. The name, however, most frequently used in their sacred literature is that of Nasoreans,naswraya which is also the usual Arabic (sing. Nasrani, pl. Nasâra) for Christians. The coincidence is striking, the more so as the Nasoræans have no leaning towardsChristianity, but rather contempt and hatred for it; nor do their doctrines betray any approximation to Christian beliefs, except perhaps in that of the existence of a saviour, although some of their ceremonies bear a superficial resemblance to Christian mysteries.

Despite the attempts by the CE at minimizing the correspondence, this conflation of sects reflects pre-Christian rituals and beliefs carried over into Christianity, including the focus on baptism, which was given great prominence within the Christian cultus evidently in order to incorporate this very important and influential sect of Nasoreans/Mandeans. In Christian times, the savior figure central to this widespread sect was not Jesus but, interestingly, John the Baptist, again apparently representing the archaic reverence of Oannes.

Baptism throughout the Ages

The Baptist story depicts not only ancient myth but also the archaic practice of baptism, a tradition found in numerous places for millennia, including the very region John was said to inhabit. The presence of “lustral baths” in many ruins globally also reflects the profusion and importance of this ritual. As I relate in my book Suns of God: Krishna, Buddha and Christ Unveiled, baptism was therefore quite common among the pre-Christian “heathen” and Jews, as admitted even by the Catholic Encyclopedia (“Baptism“), which claims that it was “natural and expressive” to wash the exterior as being symbolic of “interior purification.”

The use of lustral water is found among the Babylonians, Assyrians, Egyptians, Greeks, Romans, Hindus, and others. A closer resemblance to Christian baptism is found in a form of Jewish baptism, to be bestowed on proselytes, given in the Babylonian Talmud…

As I reveal in Did Moses Exist? The Myth of the Israelite Lawgiver, the Jewish priesthood drew many of its rites from the Babylonians, the Israelites’ Amoritish forebears living in the same region where thrived the Oannes cult and in the direction of the Baptist’s “wilderness.”

Another ancient and revered deity whose myth evidently was drawn from to create the story of John the Baptist is the Egyptian underworld god Anubis, who was called upon to purify or baptize Osiris in much the same manner as John is depicted as baptizing Jesus. Anubis’s role is to prepare deceased individuals for their transition to the afterlife, a vital element of Egyptian religion. In early times, the dead king or pharaoh was the main focus of this ritual, considered to be the living Horus on Earth and Osiris in the afterlife. In this purification ritual, Anubis pours water over Osiris, in an act that ensures the latter’s immortality and divinity.

I discuss Anubis and John in detail in my book Christ in Egypt: The Horus-Jesus Connection, complete with illustrations and evidence from ancient texts. One of the aspects in common besides the act of baptism/purification is that Anubis is a decapitated human figure with the head of a jackal. As one of his totems, he carries a decapitated jackal skin with him; hence, the element of beheading is prominent in his mythos, as it is in the story of the Baptist.

As also discussed in Christ in Egypt, by the time the gospel story was composed, the elite of Rome such as the emperors were increasingly steeped in Egyptian religion and myth, and Anubis had become one of the favored gods of the empire. Hence, his myth and role – including and especially as the savior’s baptist – would be important to incorporate in a “universal” religion, as the word catholic means in Latin.

A Historical John in Josephus?

The discussion so far has served to demonstrate that the figure of John the Baptist is based on myth and does not represent a historical individual. His presence in the writings of the Jewish historian Josephus creates more problems than serving as “proof” of a historical figure, as the account at Antiquities 18.5.2/116-119 is different from that presented in the New Testament.

One of these differences is John’s all-important death, which in Josephus is not at the hands of Herod Antipas’s stepdaughter, Salome, but occurs at the fort of Machaerus in Jordan. Like the Testimonium Flavianum concerning Jesus breaking the narrative about Pilate, the whole of 18.5.2 is sandwiched into a discussion of Herod and Vitellius, and has the appearance of an interpolation into the text.

In the next chapter (Ant. 18:5:4), Josephus gives a dry accounting of Herod’s family members by marriage and birth, listing Salome among others. At this point, rather than such a disinterested passing remark, one would think that had the gospel tale been actual history, Josephus would have been quick to recount such an evil and striking atrocity as the holy man’s beheading in exchange for the stepdaughter’s dancing (Mk 6:21-29).

Josephus’s supposed assessment of John as a “good man,” while the historian derides other such “popular leaders” as “deceivers” and “enchanters,” likewise indicates a Christian hand at work. All in all, the evidence points to the biblical figure as a mythical character, not a historical person.

John and Jesus as Solar Figures

Both of the Baptist’s mythical precursors Oannes and Anubis possess significant solar attributes, as part of the ancient and widespread tradition of the “Great God Sun” or sun worship found in countless cultures globally. One important element of Anubis’s myth is his interchangeable role with his brother Osiris, as one or the other was depicted as the presiding deity over one or the other of the solstices. Both brothers were portrayed as born around the summer solstice, while Osiris was resurrected at the winter solstice, when his “son” or alter ego Horus likewise was said to be born.

Hence, Osiris and Anubis represented the two half-year periods from solstice to solstice, withAnubis particularly the solar hero from summer to winter solstice, while Osiris was the presiding deity from winter to summer. In this regard, Anubis the Purifier would decrease so that Osiris the King could increase, representing the ancient perception of the sun’s slow decline towards winter after its peak in summer, along with its rebirth and growth during the six months from winter solstice to summer.

This fact of Anubis and Osiris symbolizing the solstices explains the enigmatic roles of their Christian counterparts John and Jesus. As I state in The 2015 Astrotheology Calendar, the same archetypical seasonal transition is described in the New Testament, with Jesus “the Sun of Righteousness” (Mal 4:2) symbolizing the winter-to-summer season, while John “the Forerunner” personifies the six-month cycle from the summer solstice to the winter, explaining the mysterious passage at John 3:30:

“He must increase, but I must decrease.”

In this same regard, John “was not the light, but came to bear witness to the light.” (Jn 1:8)

Although the Bible does not specify the dates of John and Jesus’s birthdays, their conceptions are stated biblically to have been six months apart (Luke 1:36), and the Baptist’s birthday began to be celebrated at the summer solstice (June 24th) in early Christian times, which would place Jesus’s birth at the winter solstice or “Christmas.” Like Osiris and Anubis, therefore, Jesus and John are the presiding dignitaries of the solstices.

This solar alliance is the hidden relationship between Jesus and John the Baptist. Once one has understood that the gospel story constitutes allegory and myth, not history, many of its enigmas are explained in like manner.