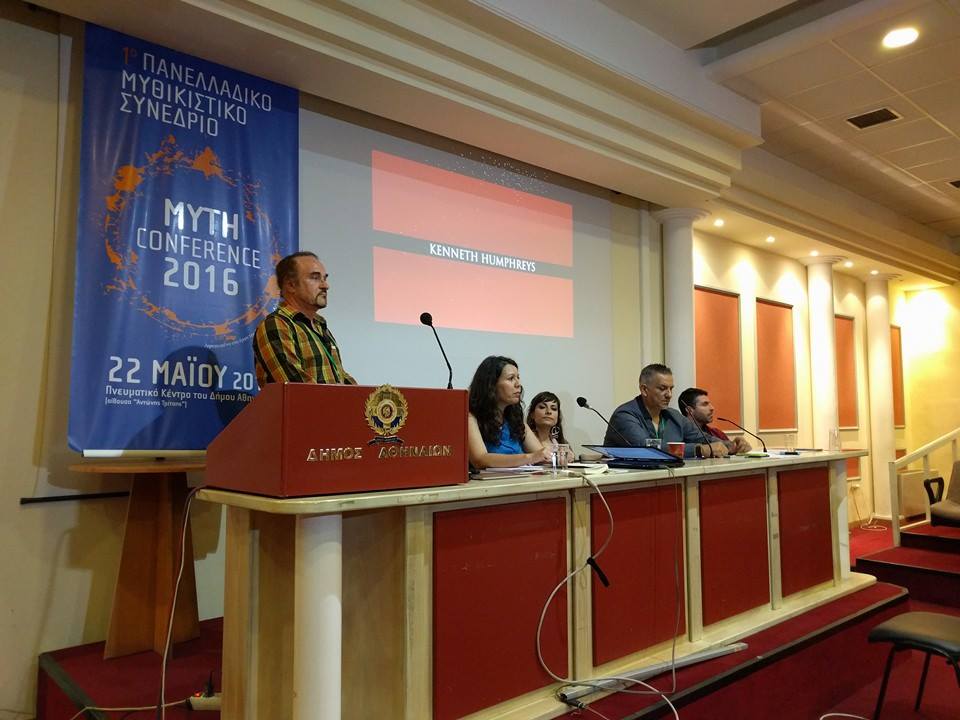 What an honour to have been a guest speaker at the First Panhellenic Mythicist Conference, held in May 2016!

This was a well-organised conference held in the prestigious Athens Cultural Centre, with a dozen excellent speakers from diverse academic and research backgrounds and speaking on a wide range of mythicist topics. The Greeks are justifiably proud of their cultural heritage of myth, one of their many gifts to civilisation, and not lost even if obscured by centuries of religious Orthodoxy. Greek Mythicists are far from being stridently anti-Christian but the contribution they are able to make in exposing the falsification of the tales of Jesus from the myths of ancient Greece is without equal. A Jewish corpse Jesus may be but he is a corpse clothed in the myths of ancient Greece.

A public transport strike did not deter a good attendance at the conference, and the audience remained engaged for eight long hours of detailed and informed erudition. I had the services of two excellent translators. The presentations began with a consideration of ubiquitous solar myths and symbolism (profs. Stephanos Paipetis, Radamanthys Anastasakis) and the shift from the collective discovery of knowledge to the restrictive “prophetic revelation” and symbolic hero-types typical of religion. It moved through a closer consideration of the myths of Genesis and female subordination (Harita Meenee) to the emergence of the “divine mother and child” archetype (Stratos Theodosiou) and the later development of a “virgin assumed into heaven” (George Ioannidis). Discussion moved on to the subsuming of myth into the faux historicity of Christianity (Christos Panopoulos). Pre-Christian religion was shown to have profoundly influenced Christian rituals, in dance, music and voice (Ioannis Mpousiou). Antecedents to the cross were identified in Orphic archetypes (Evrinomi Gavra). Doubts as to the historicity of Jesus were expressed very early by Neoplatonists (George Gousgounis). In my own talk, I presented the worldwide dimension to Jesus mythicism and a broad-brush introduction to mythicist arguments – expertly rendered into Greek by Marietta Simegiatou.

Interludes were provided by short videos of encouragement from notable mythicists (Mythicists Milwaukee, Raphael Lataster, David Fitzgerald, Richard Carrier) and an interesting talk on fire walking (George Lekakis-Eleni Koulizaki). “Q and A” had a curious Greek twist. Apparently in Greek tradition members of the audience are allowed to make their own statements or “interventions”. No actual question is necessary. In the “less democratic” English tradition such indulgences are frowned upon!

Minas Papageorgiou, is author of Jesus Mythicism: An Introduction, a compilation from mythicist writers, which has helped fellow Greeks perceive the essentially artificial character of Jesus. Minas is to be commended for his drive and energy in making the Jesus and Myth Conference a reality and such a great success. We shall certainly be hearing more of this talented young mythicist.

Footnote: This visit to Athens allowed me to stand on a knobbly rock outcrop below the Acropolis named the Areopagus. Why is this of any interest? Because this rock was supposedly another venue on the dubious itinerary of the peripatetic and fabricated Saint Paul! Not a chance!